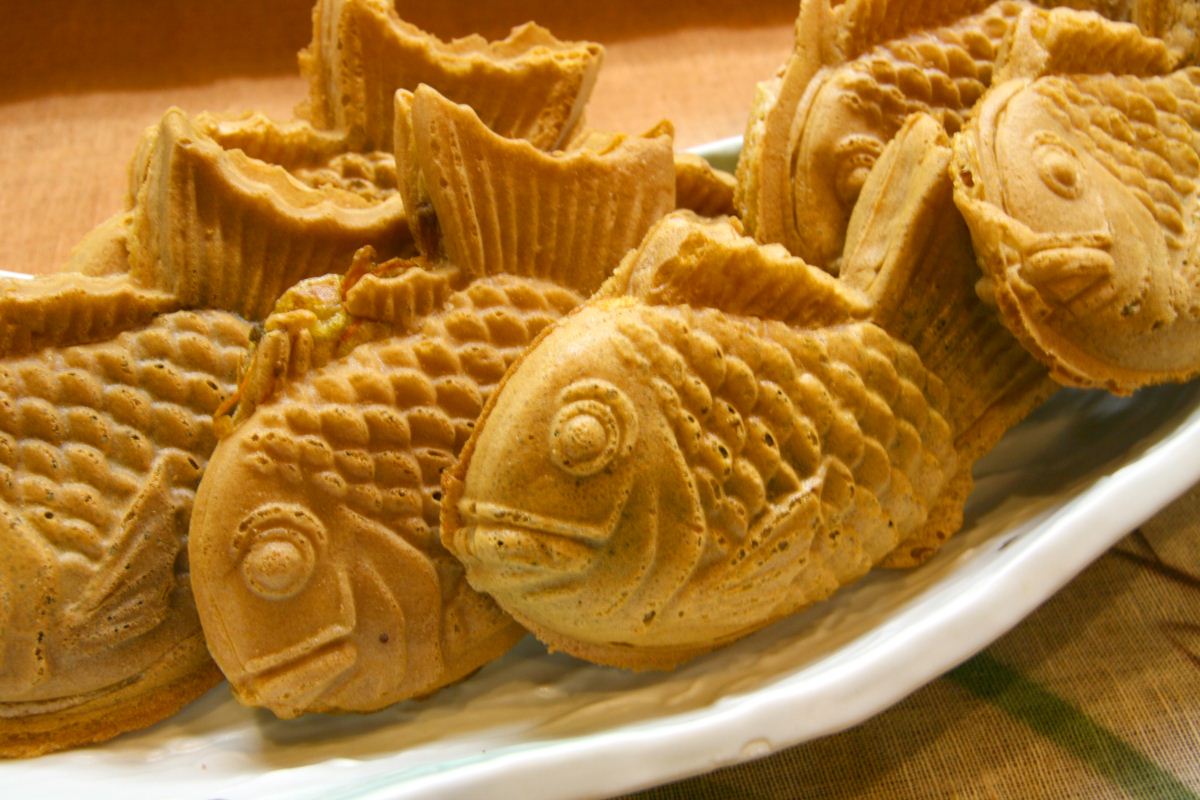 The first Japanese sweet I had ever tried was during winter in Setagaya, a suburb in south-western Tokyo. A local confectioner was making these little fish-shaped pieces of waffle, grilling them to shape on a specially designed mold. They weren’t expensive at all, around 100 yen or roughly one dollar apiece, so looking for a quick treat to warm my belly I joined the queue of people in line to order and waited my turn.

I asked for one, paid my money and walked off staring at it. It was warm to the touch with a rich smell of waffle. Then I bit into it. Wow. What a treat. I didn’t expect to find anything inside but the waffle was hiding a small dollop of red bean paste that was just sensational. I later learned that this fish-shaped treat filled with sweet bean paste was taiyaki, which literally means ‘cooked sea bream’. Of course, it wasn’t a real sea bream, just the shape, but it was luxuriously enjoyable nonetheless. 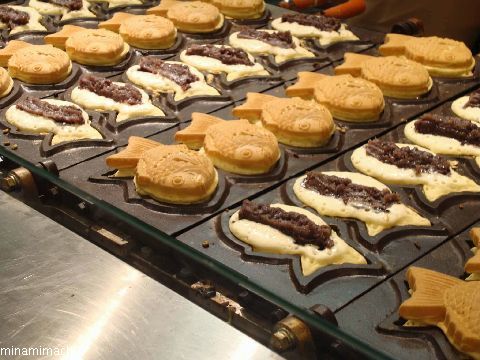 Taiyaki first appeared about a century ago in Tokyo. The story goes that a similar sweet known as imagawayaki was being sold in Kansai, the western part of Japan, and that vendors visiting Tokyo (then known as Edo) began selling it in near one of the bridges in the Kanda district.

Imagawayaki was made with a thicker batter and tended to be round in shape whereas what became taiyaki was prepared with a thinner batter leading to a slightly crispier cake and was shaped like a fish. Both sweets were part of a trend of using cast metal molds to create shape in foods. By the turn of the century, as the Meiji period was coming to an end, taiyaki was already catching and there were several mentions of them in the newspapers of the time.

Not much is recalled about why the sea bream was chosen for the shape of the mold but the most readily available theory is connected with luxury. At the time, sea bream was somewhat expensive and so, the theory goes, molds were shaped as sea breams so that the eater could at least imagine that they were doing well and eating luxuriously. In Japan, the sea bream is known as the ‘king of fish’ so this origin story doesn’t sound too far-fetched.

Another thing going for the story is that sea bream is often eaten on occasions such as New Year’s Day in anticipation of good fortune. This may have something to do with the word for sea bream, tai, sounding similar to medetai which in Japanese means happy or auspicious, the idea being that sea bream are eaten in order to bring about some good luck.

Despite it being around for quite some time, taiyaki really began to establish itself in the aftermath of World War II. With a need to earn money, making and selling taiyaki proved to be a fairly simple and inexpensive process and allowed many to earn a living in the post-war era.

It was not until 1976, however, that taiyaki truly hit it off with the fortuitous release of the song Oyoge! Taiyaki-kun. Fate has been kind to taiyaki as the song, meaning, Swim! Little Taiyaki, was an incredibly massive hit amongst both children and adults and is credited with helping popularise taiyaki in Japan. Now, from festival stalls to confectionary shops and department stores to convenience stores, taiyaki can literally be found everywhere in Japan.

Prior to all of this, a strange little incident occurred. As part of a series of articles about celebrities and experts talking about food, the novelist Andou Tsuruo wrote a piece for the newspaper, Yomiuri Shinbun. Titled, Taiyaki Tastes Better with Paste in Tail, it related his experience of meeting a taiyaki vendor who, unusually for the time it seems, filled his taiyaki, including the tail, with red bean paste. Andou thought this quite generous and the ensuing article sparked off a debate over whether or not the taiyaki tail should be filled with bean paste. Readers responded yes or no as to the following views:

The dispute continued on with how taiyaki should be eaten; do you start eating from the head or do you begin with the tail? Some people even assigned different personality traits to different eating directions. Start from the head and you were considered an optimist. If you started from the tail you were a romantic. Someone eating from the fin was sensitive while a person who opened up the taiyaki was a person of action… 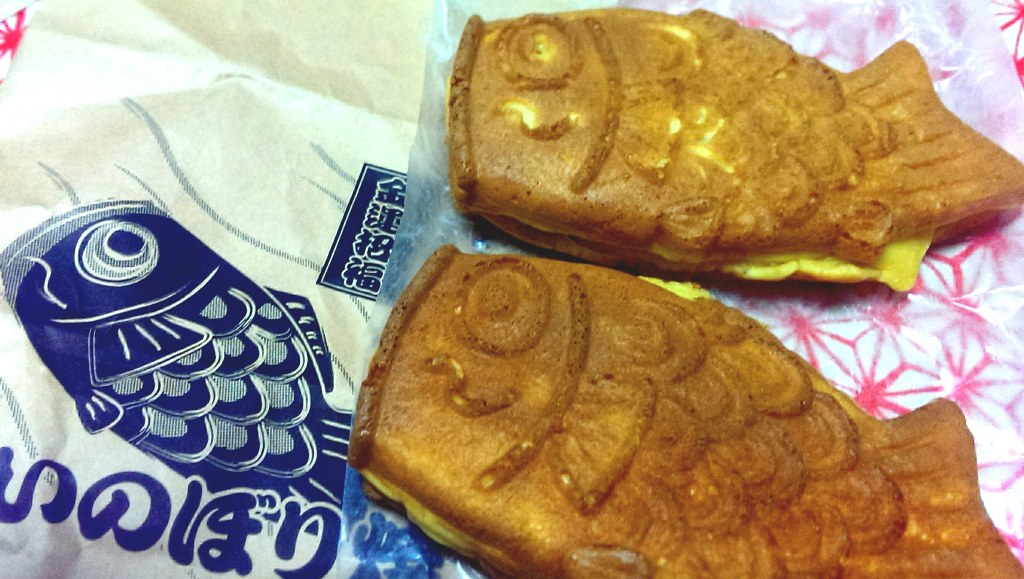 The two most common ways of preparing taiyaki are to use a single mold or a multiple mold. With the former, the chef constantly flips the taiyaki allowing the layer of skin to turn out thin and crispy. It’s common to find a lot of red bean paste in taiyaki cooked in this fashion. With the latter, the taiyaki has a much thicker and fluffier skin since the mold is too heavy to flip.

Like pretty much all of Japanese cuisine, there are a variety of differing taiyaki depending on the region of Japan you visit. In Nagasaki Prefecture, Tsushima City is home to Saga taiyaki, a taiyaki with a bent tail and a more circular shape to the body more in line with the original imagawayaki sweet. Another version of taiyaki comes with wings. This type of taiyaki is known as hanetsuki taiyaki (taiyaki with wings attached) and sees the fish shape surrounded by a thin and crispy, rectangular wafer of batter. There is even a croissant-style of taiyaki available.

Even the temperature gets a say with taiyaki. In Akita City, you can find a chilled version of taiyaki called, you guessed it, chilled taiyaki (hiyashi taiyaki) while up north in Aomori Prefecture in the town of Goshogawara, you can gorge yourself on a deep fried taiyaki called it agetai taiyaki (fried taiyaki).

You may have noticed that whether it is sea bream or the prehistoric looking coelacanth, these taiyaki are still shaped as fish. But a casual glance at almost any store selling taiyaki and you will find more than just fish. Taiyaki come in all manner of shapes including people’s faces, birds, tortoises, anime characters such as Doraemon, demons, temples, and even the ubiquitous Hello Kitty. When they are shaped as people or animals, they are called ningyoyaki (cooked dolls). As you can guess, with so many options available, the line between imagawayaki, ningyoyaki and taiyaki really becomes quite blurred.

As well as shape, there are a multitude of flavours beyond the traditional red bean paste and the yellow, tawny-brown coloured batter. This batter colour stems from the egg yolk used in its preparation but if made with only the egg white then the taiyaki turns white and is called shiro taiyaki (white taiyaki). There is even sakura taiyaki, a cherry blossom flavoured batter giving the taiyaki a pinkish colour and a popular spring themed flavour. Of course, you can’t ignore either the macha (green tea) batter or the chocolate ones.

You are spoiled for choice when it comes to the filling. In addition to the traditional red bean paste, you will have no problems in finding taiyaki filled with custard, chocolate (including hazelnut chocolate in the form of Nutella), cheese or sweet potato. Some places go the savoury route and fill their taiyaki with dumplings (gyoza), okonomiyaki (imagine that, filling your waffle with a pancake…) and sausages. I’ve even come across taiyaki that were filled with curry. 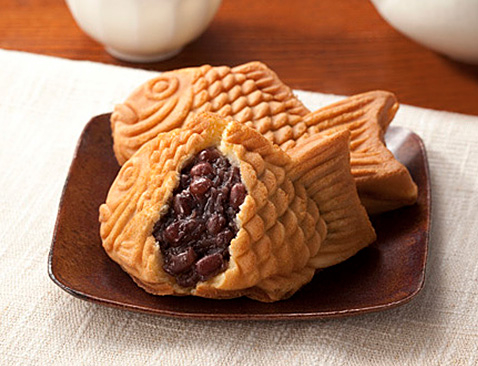 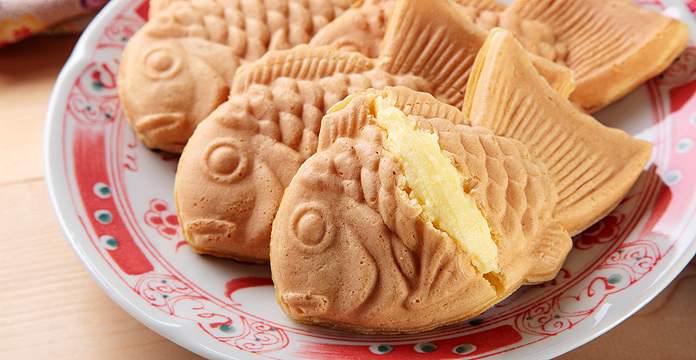 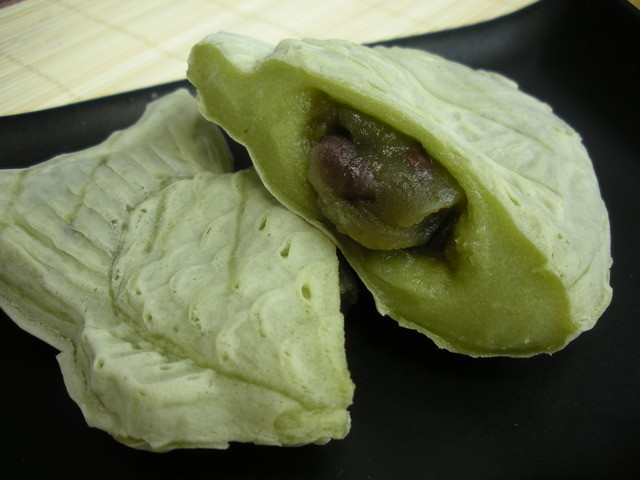 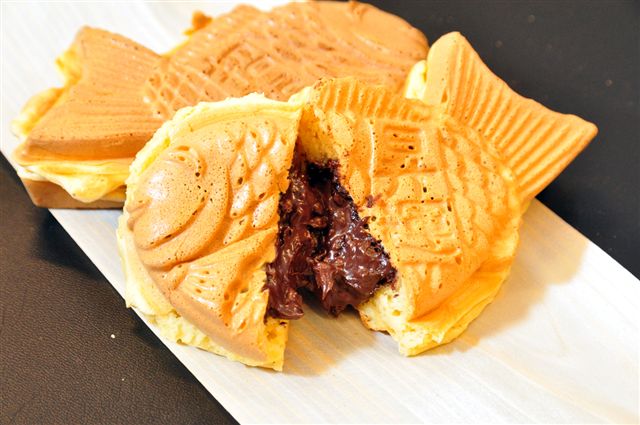 Found being handmade in stalls during festival celebrations, in little corner shops dedicated to the craft or as a factory produced souvenir from the local convenience store, taiyaki is anywhere and everywhere. So decide to be optimistic if you want and eat these incredibly delicious snacks from the head or indulge in the romantic path if you will and bite into it from the tail. Either way, you can rest happy knowing that there will be a taiyaki somewhere out there just waiting for you.

What is Japan’s national dish? I am sure that many foreign people would answer sukiyaki …