Made from buckwheat flour, soba is a traditional Japanese noodle dish and is considered to represent Japanese cuisine in the same way that sushi and tempura do. Easily underestimated because of the simpleness of its appearance, freshly made and eaten soba is truly one of the culinary delights of Japan.

Able to be served hot or cold, soba is common all over Japan with regional variations dotting the culinary map. From factory made convenience store soba and te-uchi handmade specialist restaurants who limit themselves to a quota of servings per day to the toshikoshi soba of New Year’s Eve and hikkoshi soba given to new neighbours, soba noodles are a quintessential part of Japan culinary life.

Soba is the Japanese word for buckwheat and usually refers to the thin noodles made from its flour, or from a combination with wheat flour. However, the word soba is also used to refer to any thin noodle and so to differentiate buckwheat noodles from other noodles, the term nihon soba is sometimes used.

Soba has a history in Japan dating back to at least the 8th century of the Nara period, if not hundreds of years earlier. At this time, the soba was eaten not as a noodle but more like a boiled dumpling or a cracker. The modern noodle form of soba, known as soba kiri (cut soba) dates back to the 16-17th centuries of the Edo period.

Nobody is completely sure about the origin of soba but a collection of poems from the Edo period mention that soba noodles were being developed in Nagano Prefecture. Whatever the truth is, these noodles eventually made their way to what is now present-day Tokyo and sold as a kind of fast food in street stalls. These stalls attracted people interested in having a causal meal, the noodles were a hit and off they went on to spread throughout Japan.

To Slurp or Not

If there is a food that is meant to be slurped, soba is it. The common theory goes that slurping helps to bring out the flavour of the noodles by drawing air into the nasal passage. An addition to that theory is that the sound itself helps to convey a sense of deliciousness. Whatever the answer is, soba is perfectly placed for a slurp or two.

Soba can be broken down into two main types, chilled soba and hot soba. The difference being that while chilled soba is separate from its dipping broth, hot soba is served in a bowl of broth as a warm noodle soup.

Served on a sieve-like bamboo tray, chilled soba is the soba experience purists swear by. It is served with a dipping broth known as tsuyu which is a strong mixture of dashi, sweetened soy sauce and mirin. Wasabi and scallions are often mixed into the tsuyu. After the noodles are eaten, common practice is to mix the water the soba was cooked in, sobayu, with the leftover tsuyu and drink it. There are several kinds of chilled soba. These include:

Served on a tray, mori soba (which simply means a serving of soba) comes with a tsuyu dipping broth and is the basic version of soba noodles. The cheaper version is made with dried soba that is boiled then drained but if you get the chance, eat it as te-uchi soba, handmade and fresh. 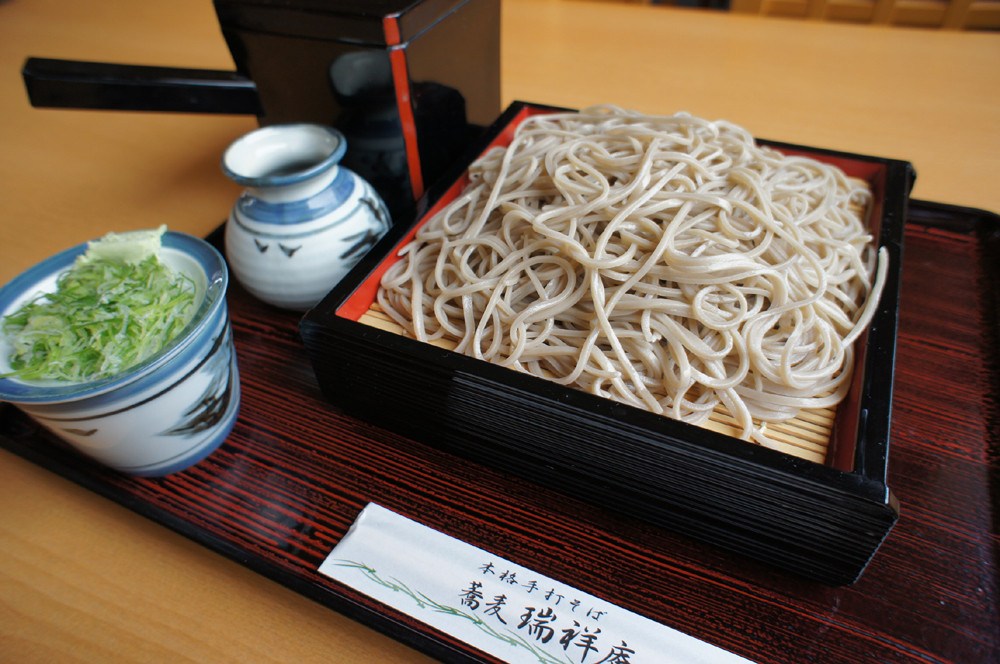 Zaru soba is basically a mori soba, again served on a bamboo sieve-tray (hence the name zaru) but this time topped with shredded nori seaweed. Like mori soba, most zaru soba is made with a dried soba but again, spoil yourself and eat it te-uchi.

Probably the purest form of soba, hadaka means naked and in this case, hadaka soba comes as the name suggest, bare bones and without toppings or broth…

Literally ‘chilled soba’, you’ll find hiyashi soba served with toppings after which the tsuyu broth is then poured on top. Other variations include soba maki which is basically soba noodles wrapped in nori seaweed and soba salad, noodles mixed with vegetables in a sesame dressing. 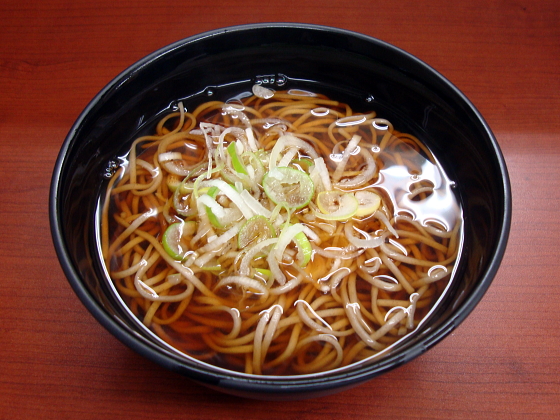 Served in a thinner tsuyu compared with the broth in chilled soba, hot soba is a popular variation, not only during winter but throughout the year. The differences between the hot soba are to be found in the toppings.

Kake means ‘to pour over’ and that is exactly what happens in kake soba as a thin, but hot tsuyu broth is poured over the soba noodles and sometimes served with sliced scallion and at times, kameboko fish cake. Kake soba is the most basic way of eating soba hot and can be found all over Japan. 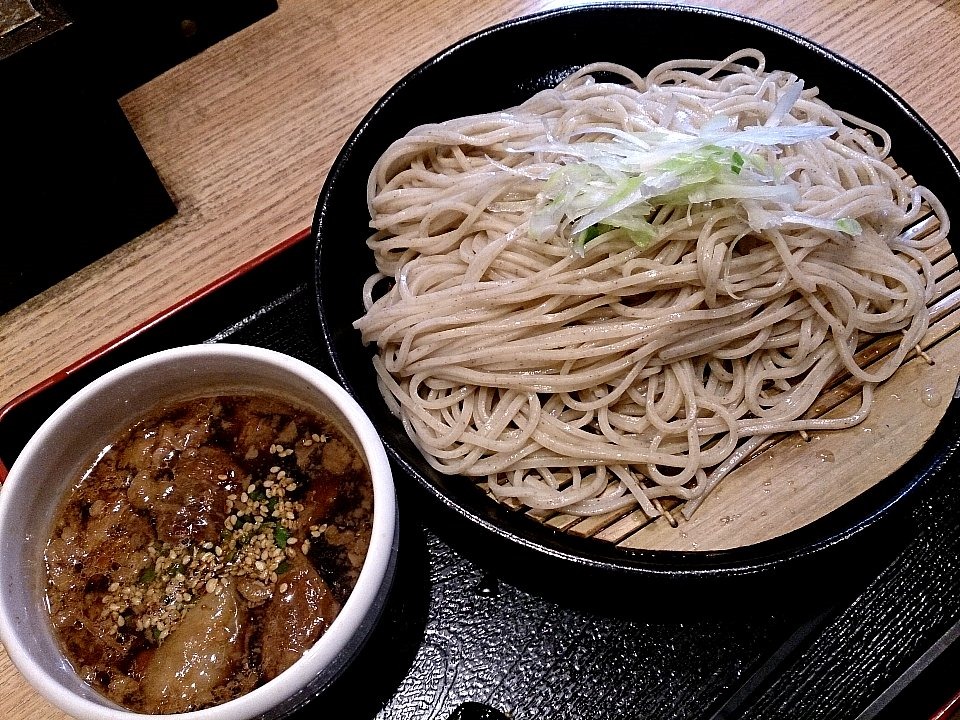 Tsuke soba is a soba that began in the Shinjuku area of Tokyo at a store named Tsuke Soba Azuchi who came up with the idea of using soba noodles instead of ramen noodles for its dipping noodle menu. The toppings and dipping broth depend on the season and with broths like tomato available, are quite unique. 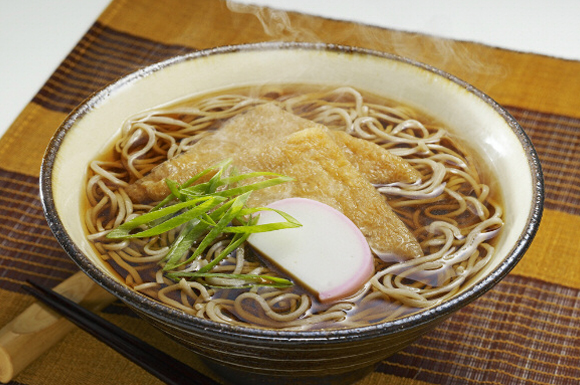 Named after the fox deity who had a fondness for fried tofu, kitsune soba is known as tanuki soba (raccoon dog soba) in Osaka and is topped with, yes, one or two thin sheets of aburaage or fried tofu. However, be careful. If you order a tanuki soba in Tokyo, you’ll get soba topped with crunchy bits of fried tempura batter known as tekasu. If you want this tenkasu topped soba in Osaka, ask for haikara soba. 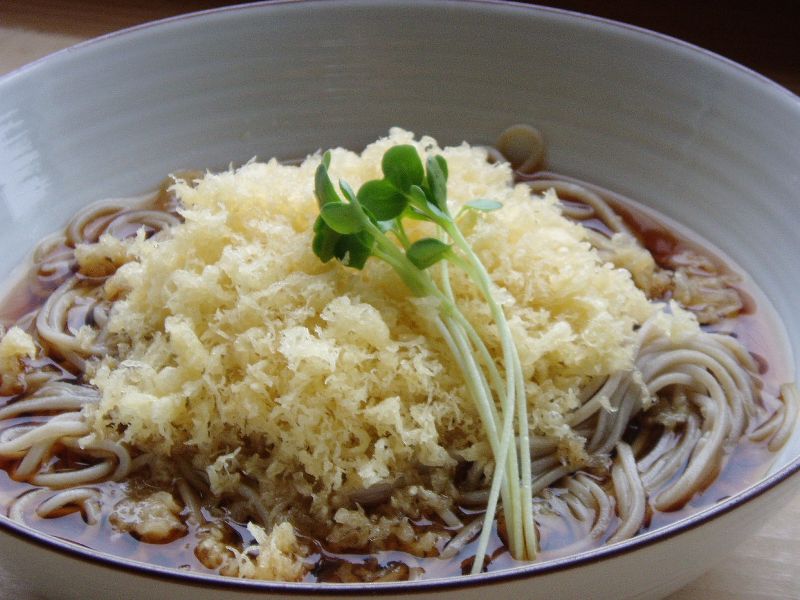 Said to have originated in the middle of the Edo period, tempura soba, or tensoba, is a soba topped with shrimp or vegetable tempura. Eastern Japan tends to use assorted vegetable tempura toppings, western Japan will use shrimp and copious amounts of batter, Kanto will use fish paste cakes while Kyushu is known for its fried fishcake topping. Tenzaru soba is soba with a side dish of tusyu dipping broth and tempura. 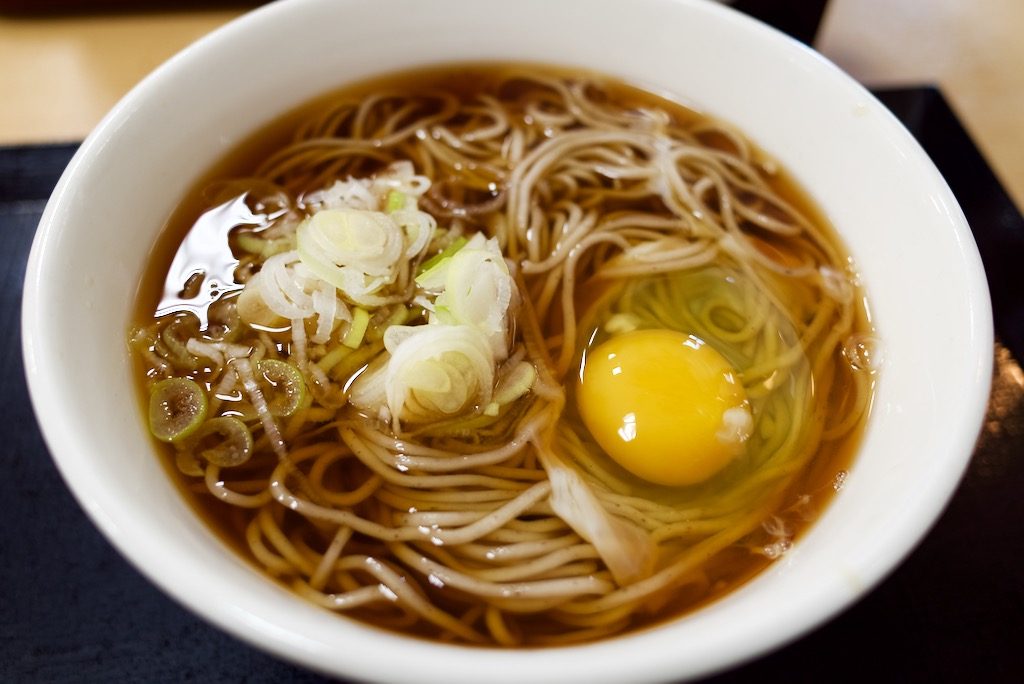 Tsukimi soba, literally moon viewing soba, is a kake soba topped with a raw egg. Once the hot broth is poured over it, the egg becomes poached and the resulting yellow yolk is said to resemble the moon, hence its popularity during tsukimi gatherings. 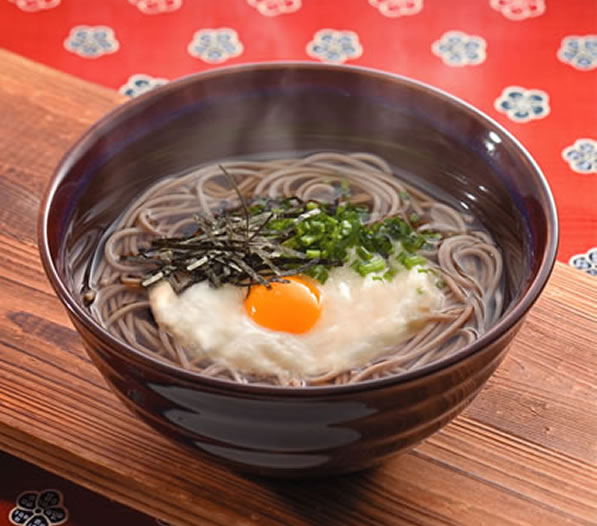 Tororo soba is soba topped with grated nagaimo or yam. The resulting white, sticky paste is also served as a side dish to be dipped into. Tororo soba is also known as yamakake soba and is a popular way of eating soba noodles.

There are many other kinds of hot soba, usually named according to their topping such as wakame soba, nameko soba and sansai soba which are soba topped with wakame seaweed, nameko mushrooms and mountain vegetables, respectively.

It’s one of the great delights of Japanese cuisine that one can travel the country and take in the breathtaking variety and variations on a theme that are available. Soba noodles are no expection to this. While the best quality soba noodles come from Nagano and Yamagata prefectures, other regions have their own take on the dish.

Soba from Nagano is known as Shinshu soba and is considered to be the best in Japan. Takato soba is served with a side of grilled miso paste which is mixed with the tsuyu and then used as a dipping broth. Tomikura soba is a semi-translucent noodle with an al dente texture and Toji soba is dipped into a large pot that contains tsuyu and seasonal vegetables.

Ita soba, a Yamagata specialty, is cut slightly wider and served on large boards. Unpolished buckwheat is used so the texture and fragrance turn out more pronounced. The region is also famous for its niku soba, or cold soba served with beef. Yamagata also has a unique way of serving its soba: stacked on top of each other in wooden boxes.

Iwate Prefecture is the birthplace of wanko soba where a unique serving methods see its soba served continuously in very small bowls until the customer can no longer eat any more.

Kyoto is known for its cha soba which are soba noodles flavoured with green tea as well as nishin soba which is a kake soba topped with a dried herring. Nishin soba is commonly eaten on New Year’s Eve.

Izumo soba is a specialty of Shimane Prefecture and is often served in round lacquerware boxes stacked in piles of three. Soba served in this way is known as warigo soba. Izumo soba is unique because it is made from the entire buckwheat seed, making the noodles darker, more textured and for many, more flavoured.

One of Japan’s representative cuisines, soba noodles sit on the summit of rustic refinement. It truly is a must have experience when in Japan. Whether you choose the refined simplicity of handmade te-uchi mori soba, the rugged mountain specialty of Toji soba, or the challenge of just how much wanko soba your stomach can handle, there is no doubt that you will find a soba dish that is just right for you.

Known as dansu in the Tohoku region of northern Japan, anbu by the people of …